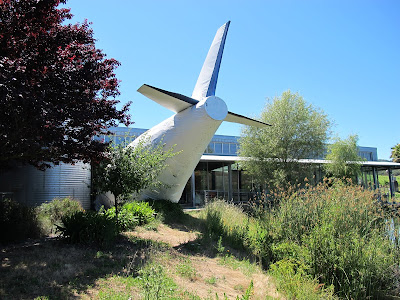 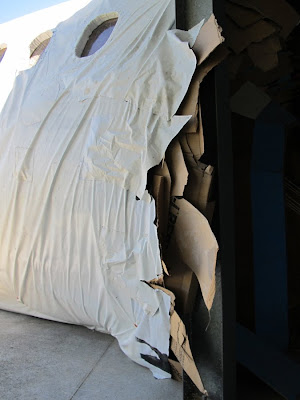 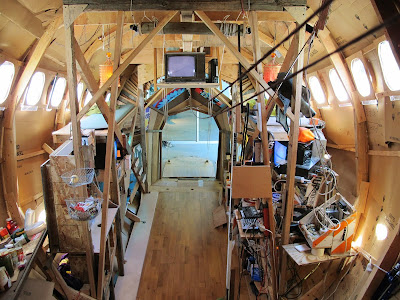 In the Summer of 2011, InkaHoots was asked to build a Stronghold at the DiRosa Preserve as part of the Zombie Proof House exhibit. The crew, wanting to explore the concept of camouflage, decided to build a survival shelter disguised as a plane crash. Made from found lumber, cardboard and old canvas billboards, the stronghold:fight or flight contained some new features like a nitro-powered rat hunter:2, various surveillance tools, and a micro powered radio station that broadcasted transmissions into the Vulture Shine/Outhouse. As part of the exhibit the Inka Hoots team filmed a zombie movie in collaboration with the students of the Oxbow School Summer camp. The Stronghold: Fight or Flight was built over the coarse of 3 weeks as part of the DiRosa residency program. Joel and Josh were hosted by some of nicest people in Napa. 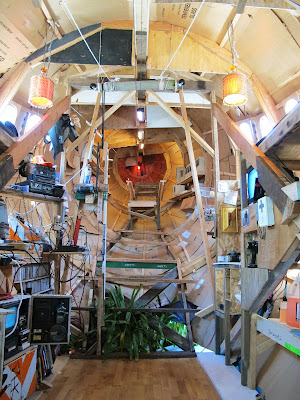 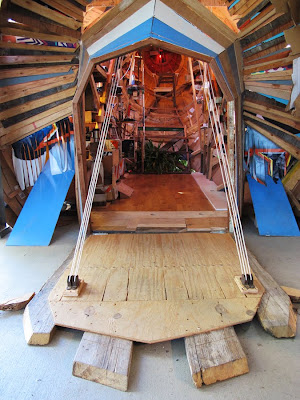 Posted by Joshua Short at 9:15 PM No comments: 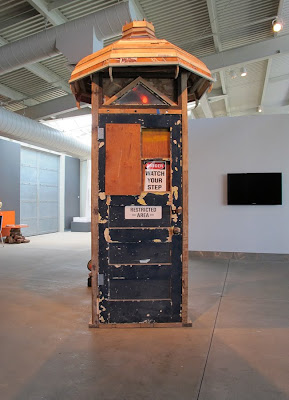 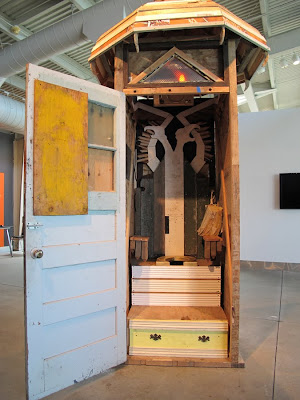 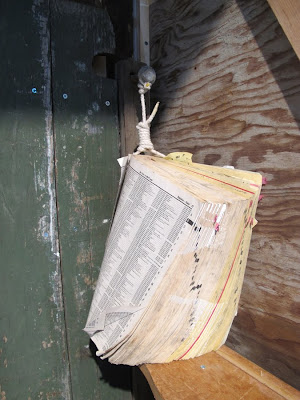 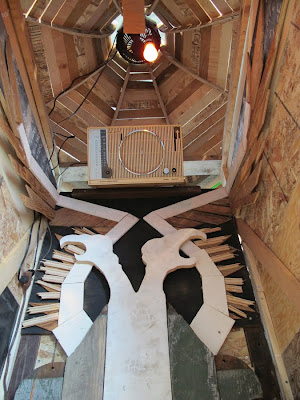 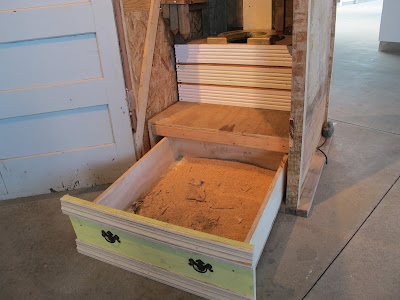 The Stronghold #2 is a Shine Dedicated to the Vulture God, which in the Inka Hoots universe takes a position high on the food chain. This god represents the scavenger spirit. Making due and thriving with waste leftover from others. This is a mantra at the center of the Inka Hoots methodology.


The Stronghold #2 is a measure of this philosophy. Not only is it a shine, but it is also a composting toilet equipped with an exhaust fan, an old phone book as toilet paper, built in radio, and easy access sanitation drawer and a bug lamp.

Posted by Joshua Short at 10:00 PM No comments:

Vehicles of the Stronghold 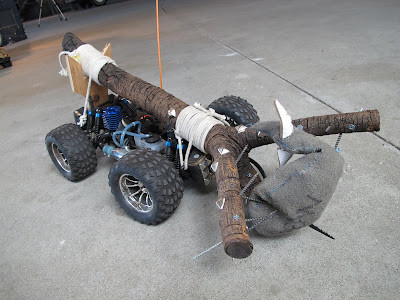 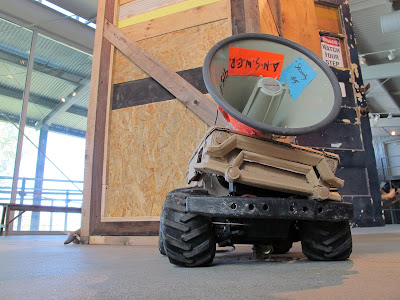 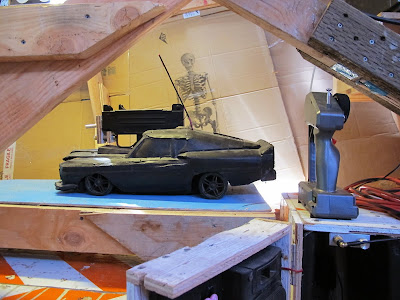 InkaHoots utilizes a variety of remote controlled vehicles for two main functions. Firstly the RCV serves as a unmanned reconnaissance. In WROL (Without Rule Of Law) and SHTF (Shit Hits The Fan) environments you need as much "behind the lines" support as you can get. Secondly, Inka Hoots utilizes the RCV as a form of rodent control. The Rat Hunters are equipped with a several offensive weapons including a pike, automatic pellet gun and a sonic blaster fashioned from an old megaphone.
Posted by Joshua Short at 9:44 PM No comments:

Thanks Scott! This is such an Amazing video.
Posted by Joshua Short at 5:41 PM No comments:

Inka Hoots at the DIRosa Preserve

Inka and the boys are ramping up for a new Version of the Stronghold in the upcoming exhibition,"Zombie Proof House". Concept Drawings will follow shortly.
Posted by Joshua Short at 11:02 AM No comments: 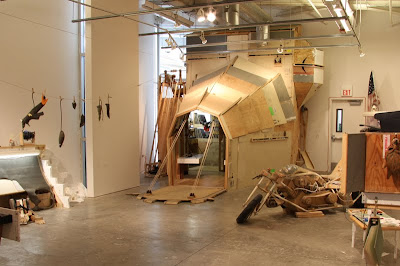 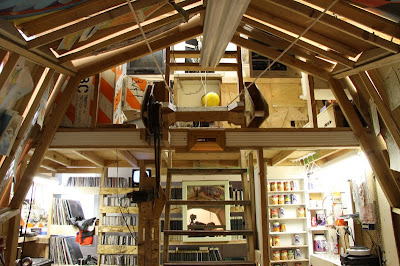 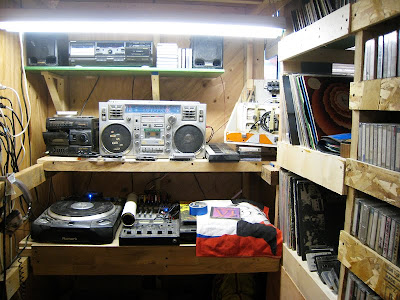 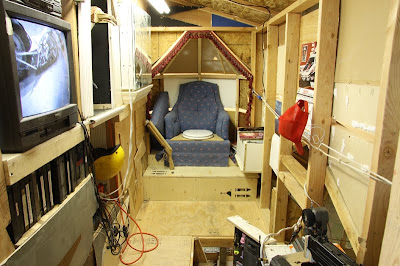 The Stronghold is ongoing project based on concepts of survival and self-reliance.
This was the first incarnation Inka Hoots Stronghold project. The structure was built to support two people for long periods of time. We took into consideration the physical and mental needs a person would need for surviving long stretches of time in a hostile environment.
The ground level of the stronghold was equipped with a pirate radio station, kitchenette, sleeping quarters, a functioning drawbridge, a library of records, CD's, tapes, and encyclopedias, as well as first aid cabinet. The mantel above the stairway was adorned with a gold framed survival knife.
The Kitchenette was complete with a "ration cupboard" contain a month supply of canned goods, ravioli, peas and carrots, PBR, protein powder, and a can of turkey chili. The Kitchen also contained a "DIY Mr. Coffee" built from a heating coil and plumbing parts. The "George Foreman Fallout Grill" also was part of the Kitchen.
Opposite of the Kitchenette was a pirate radio station that was built from electronic stereo equipment that was scavenged from the SF dump, and reconfigured to broadcast a 24 hour radio transmission throughout the surrounding space. Guest DJ's were invited to host radio shows, as well as a live performance by "Nuclear Death Wish".
The Second level of the Stronghold contained a Toilet made from a lazyboy, surveillance units, a medicine cabinet, playboy collection, a shrine to the vulture god, a deck to the rat eradication deployment unit and the RatHunter 3000
The battle between the Stronghold and the rats will be explained in a forthcoming post, which will also cover the Molotov Cocktail Party, 11th hour video club, nuclear winter rat making station, and the ratipult.
Posted by Joshua Short at 9:53 PM 2 comments: 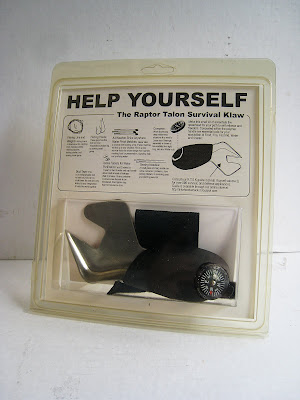 The Raptor Talon survival Klaw is the first of many survival units to be created by Inka Hoots. This unit contains the essential tools for basic survival, allowing to to secure food, shelter, fire and potable water. Next up will be a guide and supplemental kits to help you construct your own Go-bag. 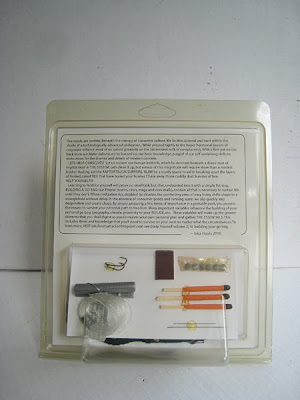 Posted by Joshua Short at 1:28 PM No comments: